This sequel to Richard Feynamn’s Six Easy Pieces grabs six more additional lectures from his famous three-volume series, Lectures on Physics.  In this book, Feynman unfolds the complexity of Relativity, Symmetry and Space-Time.   As is typical for his style, he makes these very complex subjects approachable, but then drives deeper to reveal the mathematics behind the mysteries.   The narrative and related equations are definitely geared toward math and science students.

As is his genius, Richard Feynman often unpacks complex concepts through the use of practical analogies.  His description of curved space in Chapter 6 was one of my favorite sections (p. 112).

In order to understand this idea of curved space in two dimensions you really have to appreciate the limited point of view of the character who lives in such a space.  Suppose we imagine a bug with no eyes who lives on a plane, as show in Figure 6-1.  He can move only on the plane, and he has no way of knowing that there is any way to discover any “outside world.” (He hasn’t got your imagination.)  We are, of course, going to argue by analogy.  We live in a three-dimensional world, and we don’t have any imagination about going off our three-dimensional world in a new direction; so we have to think the thing out by analogy.  It is as though we were bugs living on a plane, and there was a space in another direction.  That’s way we will first work with the bug, remembering that he must live on his surface and can’t get out. 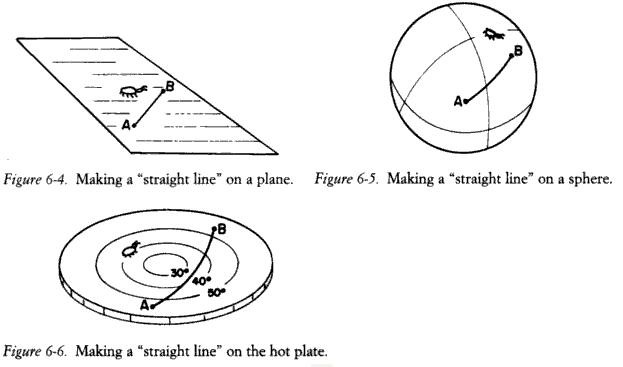 As another example of a bug living in two dimensions, let’s imagine one who lives on a sphere.  We imagine that he can walk around on the surface of the sphere, as in Figure 6-2, but that he can’t look “up,” or “down,” or “out.”

Now we want to consider still a third kind of creature.  He is also a bug like the others, and also lives on a plane, as our first bug did, but this time the plane is peculiar.  The temperature is different at different places.  Also, the bug and any rules he uses are all made of the same material which expands when it is heated.  Whenever he puts a ruler somewhere to measure something the ruler expands immediately to the proper length for the temperature at that place.  Whenever he puts any object–himself, a ruler, a triangle, or anything–the thing stretches itself because of the thermal expansion.

Feynman uses this constructed analogy to explain how the bug would get different measurements in each of these “worlds.”  The bug is able to determine what type of world it lives in based on the measurements.  It is interesting to see through his example that the bug on the sphere experiences the same measurements as the bug on the temperature varying hotplate (both can measure a triangle with an angle-sum of 270 degrees where the bug in the plane would see a maximum sum of 180 degrees).  Scientist speculate on the “space” curvature of the universe by conducting experiments.  So far, it is inconclusive.

In this book, Feynman also covers a refresher course on Vectors (Ch. 1), discusses the Symmetry in Physical Laws (Ch. 2), does a detailed analysis of The Special Theory of Relativity (Ch. 3), Relativistic Energy and Momentum (Ch. 4), Space-Time (Ch. 5), and Curved Space (Ch. 6).

The Special Theory of Realativity (p. 49) is a facinating approach to motion that for over 200 years was ruled by equations developed by Isaac Newton.   In Newton’s Second Law,

which is the same as F=ma (where a is acceleration or the time derivative of velocity, dv/dt), the assumption is that mass (m) is a constant.  Einstein corrected this formula with his theory by saying that mass has the changing value,