My dad always dreamed I would follow his footsteps and become a land surveyor and civil engineer. In my teens, I worked summers as a surveyor. It was hot, dusty and grueling work. I was fascinated at how you could use science, geometry, a transit and a level to convert a cow pasture into a residential or commercial subdivision, but I was enamored with computers more. I decided to pursue a computer science degree. After college, I started freelancing. I wrote business management software for retail and mail order companies. I installed networks, set up file servers, and developed control software for a local glass factory. I loved working with people and enjoyed seeing technology help solve business problems. I was having a blast! Ironically, my next client would help fulfill my dad’s dream.

My dad’s engineering firm needed to “computerize” to stay relevant in the market. Their manual design work, drafting and surveying was being displaced by modern firms using computer aided design. They needed help. I was hired to computerize the business. I purchased AutoCAD and began writing software to automate the tedious calculations for hydrology, earthworks, structural analysis and coordinate geometry. All the drawings were manual so I started working with the drafting team to convert them to digital. We were making great progress getting new projects into the computerize workflow. Then I hit a snag.

“Keep that @#$% computer away from my projects!” One of the founding engineers was less enthusiastic about all this new technology. His team was instructed to avoid me and stay the course on their manual processes. I was shocked! I hadn’t anticipated this reaction. Why wouldn’t everyone want this technological magic? I was faced with one of the great leadership lessons in life. People resist change. We are habitual. We avoid risk by default, especially if the change isn’t something we understand or control. I started this transformation expecting that the hardest job would be all the lines of code, integration of new software and systems, but I soon discovered that the biggest tasks was going to be onboarding my fellow humans. How should I respond? I could enlist the edict approach. After all, I happened to know the boss. But I knew that wouldn’t create the culture or environment that would lead to our long term success.

I set my target on being as successful as possible with the teams that were onboard with the transition. They were excited and enthusiastic about what we were doing. It was hard work and required some iterations, but finally all the calculations were being made by the computer. To be fair, for the first projects, it took a little longer than the manual path. Our skeptical engineer was quick to call that to our attention. We printed our results and submitted them for review at the city. A new requirement hit from the land owner and the city council. A complete design change was needed, an effort that would have taken months. The skeptical engineer laughed at first, but what happened next changed everything. Because it was digital, we only needed to edit the code and have the system recompute the models. In less than a week, we resubmitted and received approval. We moved on to construction.

“How on earth did you do that?!” the skeptical engineer was shocked. We patiently explained what it took. We were honest about some of the difficult bits and listened intently to any of the concerns or questions that were raised. The team that had been through the transformation was elated with the results and their enthusiasm was contagious. Soon, the once skeptical engineer, still being terse and grumpy, demanded, “How soon can you get all my projects in that @#% thing?”

The engineer who was skeptical not only acquiesced to using the new technology, but he and his team became the biggest users and supporters of the systems we built. They were delivering two times more projects than everyone else. He went from blocker to champion.

This taught me a valuable lesson that has stayed with me throughout my career. As technologists, we amplify the business by introducing new ways to deliver value. We automate. We code. We transform. We create faster ways to get things done. But in all of that, we can’t forget that the most important role we play is bringing our fellow humans along for the journey. Sometimes that even includes that fellow human looking back at us in the mirror. Change is hard. Change without people is impossible. With patience, empathy and determination, we can enlist the hearts and minds of our fellow human beings and help unlock the unlimited potential before us.

“Dad, you weren’t listening! We told you already.”

I’m a great listener. Well, at least that is what I originally thought. In reality, there are many times when I’m present in body, but absent in listening. The audio channel is working but my mind is tuning it out. In some conversations, I find my mind daydreaming, racing toward solutions, practical steps and action planning instead of hearing what is being said. Have you ever experienced that? Thankfully, I have three attentive daughters who make sure I know when that is happening.

Listening. It’s one of the core senses we have as humans, but do we use it well? In my conversations with businesses across the company and across the industry, they often cite that a key challenge working with “centralized shared services teams” is getting them to listen. I am often told things like, “They come to tell, but we wish they would come to listen.” When I probe that sentiment, it is very clear that the desire is to have the other party fully understand them. It isn’t just to recognize the words, concepts or thoughts, but to fully connect with their frame of reference. It is to intimately understand their challenges, their business needs, their priorities, passions, practices and people. By doing so, the help that the central team offers is more relevant, effective and wanted. In the end, they want to be heard and understood. Isn’t that what we all want?

In a recent call with our CIO, she challenged us all to pick a “focus word” for 2023. For me, on both a personal and professional level, I picked the word “listen.” I want to improve my ability to hear with understanding. And I want to champion and expand my team’s ability to “listen” and help the businesses we support.

We know there are challenges ahead. I anticipate a great deal of flux with new demands across the globe, new opportunities, new adventures and new perspectives. The ability and focus on intentional “listening” will be a superpower to help us all succeed. And, yes, my daughters will be happier too. 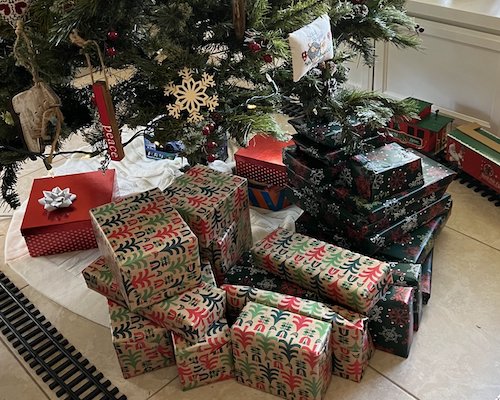 My step dad was a great storyteller. In one of the last conversations I had with him, he wanted to talk about Christmas. But first, he had to lie down. His body was riddled with cancer. His strength was gone and he needed to rest. He closed his eyes and begin to reminisce about his childhood. He loved Christmas. He told me how his dad would buy a tree and set it up in their living room a week before Christmas. You could smell the fresh cut pine throughout the house. His mother would wrap up the presents and put them under the tree. He recalled how he and his brother would sneak in to inspect and shake the presents. They would try to imagine what was inside. Maybe it was some socks or a new coat. Or better yet, maybe it was that new toy you always wanted! It could be anything. The colorful paper and neat bows only added to the mystery and intrigue. He couldn’t wait for Christmas morning! The days and hours would stretch on for what seemed like eternity, but then Christmas Eve would finally arrive! They could barely sleep. At first light on Christmas morning, they would rush to the tree and tear open their treasures. It was magnificent!

As he lay in his bed, struggling with some pain, a broad smile formed across his face. His eyes opened. They were beaming with a misty, joyous radiance. He looked directly at me. “Jason, I feel like Christmas is coming. Eternity is wrapped up in a beautiful package waiting for me under the tree. I can’t wait to open it. It’s like I’m holding it right now and wondering what’s inside. I keep shaking it and wondering how wonderful it will be. What is on the other side of this mortal life? What will heaven be like? Christmas morning is coming for me and I’m ready to open it.”

Not many days later, my dad opened that present. He breathed out his last terrestrial breath and drank in the brilliant glory of eternity. While his life was ending here on earth, his joy never did. With a tearful smile and a heavy heart, I sent my last wish to him as he departed, “Merry Christmas, Dad.”

I recognize this is a heavy and personal story to start off the new year, but I think it is an important one. For me, it is profoundly grounding. There are controllable and uncontrollable events on our horizon. What matters and what is in our control is how we prepare and respond to those. How we look at things shapes our destiny. It can limit us or propel us forward. Wrapped up under the tree are packages with our names on them. What will they be? What will we find inside? How will we respond? What new adventure awaits? What will we discover?

As the new year is born, we don’t know where it will take us. We will face new experiences and say farewell to others. New memories will be made and old ones will visit us. Like the stars in the heavens, they will illuminate our journey, orient us and encourage us. We will embrace the unknown and keep going. Every encounter, precious. Every person, infinitely valuable. Every day, a gift.

The future is before us, full of potential, new adventures and new memories to enjoy. Like a present under the tree, it could be anything. It’s time to start unwrapping!