“Here we have Franciscans, Armenians, Greeks, Muslim guards, and Jewish police officers. We hope and we pray that this will be a real message that the impossible can become the possible.” – Thephilos III

We love watching National Geographic documentaries on Disney+.  This weekend, my wife found a NatGeo exclusive, where scientist expose the original surface of what is traditionally considered the tomb of Jesus Christ.  The tomb had been covered since at least 1555 A.D.  The Church of the Holy Sepulchre, also known as the Church of the Resurrection, is situated over the burial tomb.  The Roman emperor, Constantine, had commissioned the church to be built at the site in 325 A.D.  It is currently under the custody of six Christian groups.  As you can imagine, they each have their own ideas, plans and dreams for this sacred place.  Throughout the years, disagreement and battles would erupt between the different parties.

Keep the Status Quo!  In 1852, the groups came together to establish cooperation and peace.  “Things, as they have been running until today, shall remain as at present, pending a final agreement.”  A system of rules would regulate this holy place.  Nothing would be allowed to change without the agreement of all parties.  This was called the “Status Quo agreement”, from Latin meaning “the existing state of affairs, the way things are.”

Well intentioned efforts to drive peace and reduce disruption can have side effects.  Earthquakes, weather and natural erosion began to deteriorate and put this sacred place at risk.  In fact, without intervention the entire structure around the tomb was at risk of collapsing and destroying this beloved place.  Sadly, no agreement could be reached.  The Status Quo remained in effect for over 160 years.  Finally, in 2015, a restoration project was launched.  The National Geographic Society received the blessing from the religious communities in alliance with the National Technical University of Athens for cultural heritage preservation.  The ongoing work to reinforce the structure and preserve the site had finally started… the impossible had become the possible.

What is your Status Quo?  Is something preventing you from taking necessary action to improve things?  I challenge you to spend time today thinking about the “Status Quo agreements” that are controlling your life or actions.  Are you finding that those imagined constraints or real agreements are preventing necessary change or maintenance?   Is unchallenged consensus immobilizing innovation or restricting required progress?  If so, it is time for a resurrection.  Challenge the Status Quo!  Make bold and ambitious plans to deliver the change needed.  Think big.  Start anew!  The impossible can become possible. 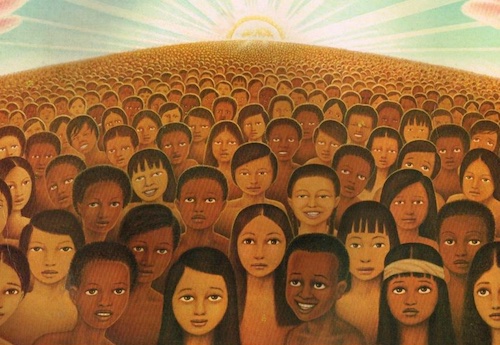 “Faith is taking the first step even when you can’t see the whole staircase.” – Rev. Dr. Martin Luther King Jr.

Harry Belafonte had an idea.  He wanted to organize relief aid to Africa.  Harry, a successful Jamaican-American singer and songwriter was well-known for his recording of “The Banana Boat Song”, with its signature “Day-O” lyric.  He envisioned writing a new song that would inspire the world.  He made a few calls.  Soon, other singers and songwriters were onboard, including Kenny Rogers, Lionel Richie and Stevie Wonder.  American record producer, Quincy Jones joined in and reached out to Michael Jackson who had just concluded a tour with his brothers after releasing his Thriller album.  Jackson was enthusiastic about the opportunity and told them he not only wanted to sing it, but wanted to help write it as well. Lionel joined Michael at the Jackson family home in Encino, California and went to work writing the song.  They wanted something that would be easy to sing and remember, yet still an anthem.  Richie had a melody which Jackson took. He added music and words to the song on the same day.  A week after starting, Jackson and Richie had the song.

“We Are the World” was recorded a week later.  An incredible cast of 45 artists joined Jackson and team, including Ray Charles, Billy Joel, Diana Ross, Cyndi Lauper, Bruce Springsteen, Tina Turner, Willie Nelson, Huey Lewis, Bette Midler, The Pointer Sisters and Jackson’s siblings.  Upon entering the recording studio, the musicians were greeted by a sign pinned to the door that read, “Please check your egos at the door.” They were also greeted by Stevie Wonder, who proclaimed that if the recording was not complete in one take, he and Ray Charles, two blind men, would drive them home.

Harry’s big idea had become reality. Once released, the song went on to raise $63M for the relief effort and topped music charts throughout the world.  It became the fastest selling U.S. pop single in history, becoming the first to be certified multi-platinum.

Think Big!  It’s easy to think small.  But thinking big requires stretching outside our comfort area and more importantly, reaching out to others.  To scale to the impact that “We Are the World” had, Harry knew he needed help.  His vision succeeded because he engaged and inspired others to follow and join his effort.

What are your big ideas?  Who are you going to enlist to help accomplish your mission?  Be bold. Have faith. Think big. In the words of the chorus that might be going through your head by now, “It’s true we’ll make a better day, just you and me.”

Picture on Post: “We Are the World” Album Cover Art

“We are the world
We are the children
We are the ones who make a brighter day, so let’s start giving
Oh, there’s a choice we’re making
We’re saving our own lives
It’s true we’ll make a better day, just you and me”

Let’s talk about Bruno!  Wait, what?  We don’t talk about Bruno?  For those of you who haven’t seen Walt Disney Animation Studios’ Encanto , you are missing out.  I won’t post any spoilers, but let’s say it is definitely one of those multi-play movies, especially at the Cox home, and likely for any of you with kids at home.  I hear the soundtrack playing again right now.

Over the holidays, I had the pleasure of going to the theater to see Encanto with my entire family, including my son who moved away.  That’s something we haven’t been able to do together for several years now.  In typical Disney fashion, the story unfolds a powerful moral narrative, celebrates family decorated with spectacular magical moments, music, characters and beautiful vibrant colors.  We talked about it as a family for hours afterwards.  Great memories!

It’s a joy and a privilege to work at Disney. We make moments that last a lifetime.  But I think we can get so caught up in the day to day, log4j or sprint of the moment that we forget the incredible impact that our work, our company and our fellow cast members have on our human family.  We make magic.  The artistry, the technical innovation, the story telling, and the signature quality of our products all power our ability to deliver enchanted experiences.  Those interactions create moments and memories that last forever.  They help craft and elevate personal narratives and family stories that pass down from one generation to the next.  Like many of my fellow cast members, I often hear family and friends excitedly convey their personal or families’ first experiences with Disney, perhaps a Mickey Mouse short, a character, a movie or a trip to Disneyland.  A smile crosses their face and they close their eyes as they reminisce and cherish those wonderful moments.

Can I suggest something?  This isn’t unique to working at Disney. All of our actions, our work and our jobs impact others. Take a few minutes today and look up from your laptop screen, walk outside and gaze out into our world.  Look at the horizon of the fabulous Earthship we are riding.  Across our world is a magnificent variety of amazing people, families and connections.  Imagine the infinite experiences happening to our human family across the globe right now. The work we do matters to them.  We can make a positive difference.

Now, let’s go make some of that magic…. Oh, and let’s talk about Bruno!