Dr. João Magueijo presents a theory that allows for variable speed of light (VSL).   This is a rather controversial subject as it deals with a value in physics that has traditionally been constant (c, the value of the speed of light, 186,000 mps or 300,000 kps).  The speed of light is the underpinnings of Einstein’s theories of special relativity, as seen in the famous E=mc² equation. 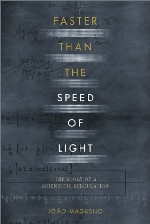 While dealing very little with the science of theory itself, João does provide a very entertaining look at the often painful, slow and bureaucratic scientific process.  He spends considerable time presenting the histories and struggles of scientist like Einstein as well as his colleagues.  These narrative backdrops are used to provide contrast and similarities to his own scientific speculation.  These also provide the basis for the bipolar challanges against and support for VSL.

João proposes that the speed of light is dependant upon energy or space-time.  He postulates that during the moment of creation, the high energy big bang of those intial moments could well increase the speed at which light travels by sixty orders of magnitude (that is 1 with 60 zeros).  This could explain the horizon problem of cosmology and propose an alternative to cosmic inflation.  This would reveal itself near black holes or cosmic strings.

Dr. João Magueijo received his doctorate from Cambridge, has been a faculty member at Princeton and Cambridge, and is currently a professor at Imperial College, London.   A lecture from João can be found here: http://forum.wgbh.org/wgbh/forum.php?lecture_id=3195

João writes, “we do not notice energy, but only variations in energy.”  He concludes the book by saying, “It’s difficult to sum up where VSL stands, as I finish this book… VSL is now an umbrella for many different theories.”