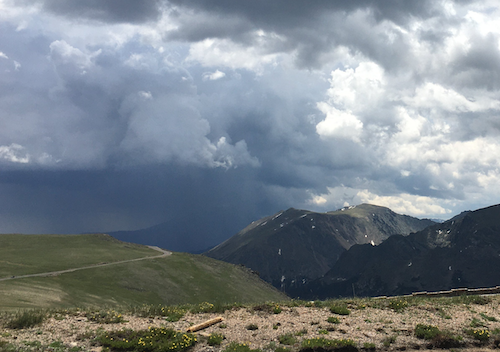 The fog was all around us. The headlights shimmered off of the cool gray guardrails along the side of the road. I drove slowly around the curve. The tension in the car was as thick as the fog outside. The view to the left and to the right was buried in the gray dark abyss. Even the stripes on the roadway vanished into the fog just a few car lengths ahead of us. The cool white darkness enveloped us. I edged forward slowly, staring intently at the yellow and white stripes that were the only visual assurances that we were still in the lane.

Then it happened. A faint white glow started to appear on the invisible horizon in front of us. It’s warm halo began to grow and soon illuminated the fog all around us. First the cliffs beside us began to materialized. Faint crevasses became sharp edges. Watercolor light splashed against the slowly appearing monochromatic landscape and painted faint hues of brown, red and green. Like a flip of the switch, the light in front of us exploded into view, quickly erasing the remaining fog and illuminating the vibrant colors that were hidden beneath the blanket of mist. It all became crystal clear. As we reached a crest in the road, we looked out into the new horizon and saw the pillowy clouds nestled amongst the royal peaks of the Rocky Mountains, standing majestically in the warm glow of the rising sun. It was breathtaking. We pulled over at a turnout to drink in this glorious view. The nervous trek up the national park highway had been worth it.

Life is full of adventures. But often, we find ourselves on fog covered roads, edging forward into the hazy unknown. It can be nerve racking and intense. It can be depressing and discouraging at times. But we keep going. At long last, we arrive and are in awe of our new destination. It fills us with unexpected joy and new views of our world. The truth is that it was always there, hidden yet waiting for us. We just needed to keep going. Life is often poetic like that. The darkest most difficult moments in life often proceed the most glorious.

Are you in a fog? Is the road before you unclear or difficult to navigate? Don’t give up! Keep going. The warm light of the sun is out there even if hidden in the mist. Keep driving. Soon the warmth and clarity of the new day will appear and wipe out the fog. You can do this!

May the sun shine on you this week!